Robert Nesta "Bob" Marley, would of been 72 this year. - Sachs & Sachs
But Bob Marley’s legacy transcends all that: his was a strong political voice that reached all corners of the world where inspiration was needed. He inspired a movement. He inspired a music genre. He was a social revolutionary.
Bob Marley, Rastafarianism, Miamim Corner Stone, Small Axe, No Woman No Cry, Redemption Song, One Love, Get Up Stand Up, Buffalo Soldier, Soul Rebel
21815
post-template-default,single,single-post,postid-21815,single-format-standard,ajax_fade,page_not_loaded,,select-theme-ver-4.1,vertical_menu_enabled, vertical_menu_transparency vertical_menu_transparency_on,wpb-js-composer js-comp-ver-5.1.1,vc_responsive 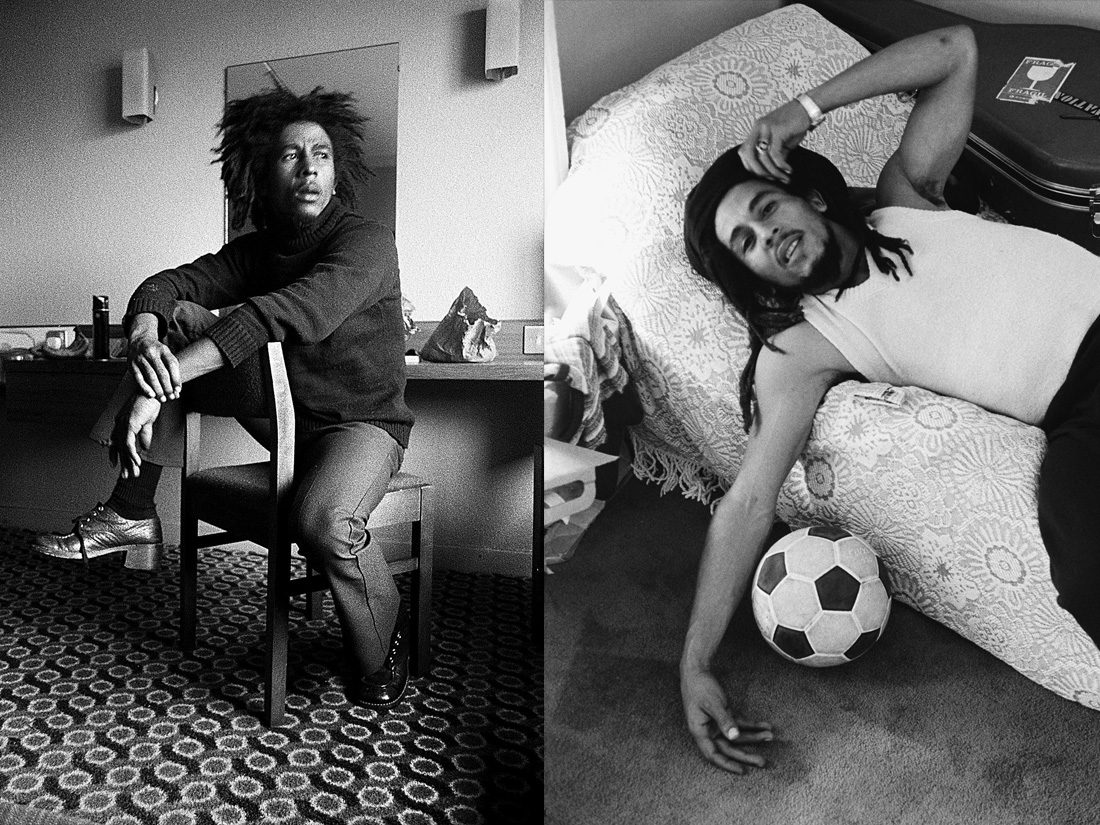 Robert Nesta “Bob” Marley, would of been 72 this year.

“If you want to get to know me, you will have to play football against me and the Wailers.” BOB MARLEY

In what would prove to be the next to the last concert of his tragically short life, Bob Marley shared the bill at Madison Square Garden with the hugely popular American funk band The Commodores. With no costumes, no choreography and no set design to speak of, “The reggae star had the majority of his listeners on their feet and in the palm of his hand,” according to New York Times critic Robert Palmer. “After this show of strength, and Mr. Marley’s intense singing and electric stage presence, the Commodores were a letdown.”

In July 1977, Marley was found to have a type of malignant melanoma under the nail of a toe. Contrary to urban legend, this lesion was not primarily caused by an injury during a football match that year, but was instead a symptom of the already-existing cancer. Marley turned down his doctors’ advice to have his toe amputated (which would have hindered his performing career), citing his religious beliefs, and instead the nail and nail bed were removed and a skin graft taken from his thigh to cover the area. Despite his illness, he continued touring and was in the process of scheduling a world tour in 1980. While Marley was flying home from Germany to Jamaica, his vital functions worsened. After landing in Miami, Florida, he was taken to the hospital for immediate medical attention. Marley died on 11 May 1981 at Cedars of Lebanon Hospital in Miami (now University of Miami Hospital), aged 36. The spread of melanoma to his lungs and brain caused his death. His final words to his son Ziggy were “Money can’t buy life.”

Rarely does one individual impact the world so much that nearly four decades after his death, he continues to influence several generations after him. Thirty six years after his death at the age of thirty six, Bob Marley still casts a powerful shadow across music, pop culture and social justice; perhaps like no other musician has done before or after him.

Born on his grandfather’s farm in the Jamaican country side in 1945 to an eighteen year old girl and a sixty year old British plantation overseer, Bob Marley was a child prodigy who would go on to be the most powerful and most important person in his country’s history.

His twenty year career that started when he was an adolescent took him from the shanties of Trenchtown to the world, using his wildly popular music to spread the gospel of peace, love, Rastafarianism- and of course, weed.

In 1964 he formed a group with his childhood friend Peter Tosh and five others, and later comprised just Marley, Bunny Wailer and Tosh. The Wailing Wailers as they were known in those days spoofed American pop songs, infused it with the local Ska music and created a sound that was emerging in the poverty stricken townships of Jamaica. Their debut album Catch A Fire brought immediate success and afforded the group the opportunity to tour Britain but marked the end of the group. His friends felt that Bob Marley role in the group was too dominant and left to start their solo careers. They would never escape that dominance for the rest of their lives.

By the end of that decade, Bob Marley had acquired a cult following globally, catapulting him into a stardom neither he nor his friends could have imagined. He moved from being a Jamaican act to an international musician that simply came from Jamaica. He became a leader of thought in his home country and converted millions of people into his Rastafari way of life. His pan-African political views also made him widely accepted among African countries that were only getting out of colonialism into self rule. From Nigeria to Zimbabwe, Bob Marley was practically worshipped.

He released fifteen albums, two of them live recordings and created iconic songs like Corner Stone, Small Axe, No Woman No Cry, Redemption Song, One Love, Get Up Stand Up, Buffalo Soldier, Soul Rebel and countless others that have grossed over seventy million records till date. His estate is said to be worth in excess of a billion dollars.

But Bob Marley’s legacy transcends all that: his was a strong political voice that reached all corners of the world where inspiration was needed. He inspired a movement. He inspired a music genre. He was a social revolutionary. Most importantly his impact becomes more striking when one considers that he did all of this while he was young- he was only 36 when he died.

Today you could play any Bob Marley song: either a love ballad like I Don’t Want To Wait In Vain or a defiant anthem like Small Axe and the feeling would still be the same. That is his legacy: impactful music that is present and conscious in the hearts of millions of people around the world, many many years after his death.