In Facebook world Everybody Lies
A digital creative agency from places all over. Our heritage is British (it rains there) and headquartered in the sub-tropics (its warm there), a small town that became a big town a destination Miami Beach.
21910
post-template-default,single,single-post,postid-21910,single-format-standard,ajax_fade,page_not_loaded,,select-theme-ver-4.1,vertical_menu_enabled, vertical_menu_transparency vertical_menu_transparency_on,wpb-js-composer js-comp-ver-5.1.1,vc_responsive 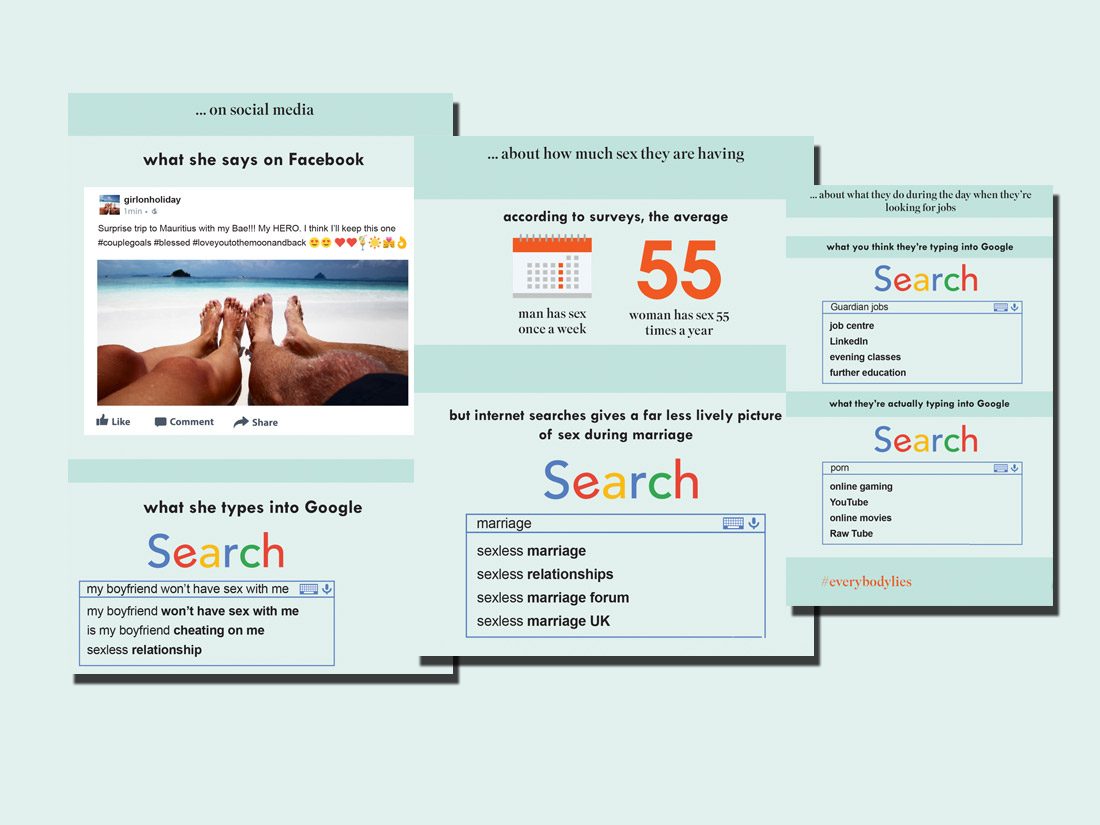 In Facebook world, the average adult seems to be happily married, vacationing in the Caribbean, and perusing the Atlantic. In the real world, a lot of people are angry, on supermarket checkout lines, peeking at the National Enquirer, ignoring the phone calls from their spouse, whom they haven’t slept with in years.

How regularly do we lie about our sex lives?

Can you beat the stock market?

The everyday act of typing a word or phrase into a compact rectangular white box leaves a small trace of truth that, when multiplied by millions, eventually reveals profound realities…

In Everybody Lies former Google data scientist Seth Stephens-Davidowitz exposes the secrets embedded in our internet searches, revealing some surprising and ground-breaking insights into society.

Everybody lies…about how much sex they are having

‘The power in Google data is that people tell the giant search engine things they might not tell anyone else. Take, for example, sex. On average, married men under sixty-five tell surveys they have sex once a week. Only 1 percent say they have gone the past year without sex. Married women report having a little less sex but not much less. Google searches give a far less lively—and, I argue, far more accurate—picture of sex during marriage. On Google, the top complaint about a marriage is not having sex.

‘I was able to use Google searches to find evidence of implicit prejudice against another segment of the population: young girls. And who, might you ask, would be harbouring bias against girls? Their parents.

It’s hardly surprising that parents of young children are often excited by the thought that their kids might be gifted. In fact, of all Google searches starting “Is my 2-year-old,” the most common next word is “gifted.” But this question is not asked equally about young boys and young girls. Parents are two and a half times more likely to ask “Is my son gifted?” than “Is my daughter gifted?”

Liberal readers may imagine that these biases are more common in conservative parts of the country, but I didn’t find any evidence of that. In fact, I did not find a significant relationship between any of these biases and the political or cultural makeup of a state. Nor is there evidence that these biases have decreased since 2004, the year for which Google search data is first available. It would seem this bias against girls is more widespread and deeply ingrained than we’d care to believe.’

There are twice as many complaints that a boyfriend won’t have sex than that a girlfriend won’t have sex. By far, the number one search complaint about a boyfriend is “My boyfriend won’t have sex with me.” (Google searches are not broken down by gender, but, since the previous analysis said that 95 percent of men are straight, we can guess that not too many “boyfriend” searches are coming from men.) How should we interpret this? Does this really imply that boyfriends withhold sex more than girlfriends? Not necessarily. As mentioned earlier, Google searches can be biased in favour of stuff people are uptight talking about. Men may feel more comfortable telling their friends about their girlfriend’s lack of sexual interest than women are telling their friends about their boyfriend’s. Still, even if the Google data does not imply that boyfriends are really twice as likely to avoid sex as girlfriends, it does suggest that boyfriends avoiding sex is more common than people let on.

Everybody lies…about their attitudes towards race 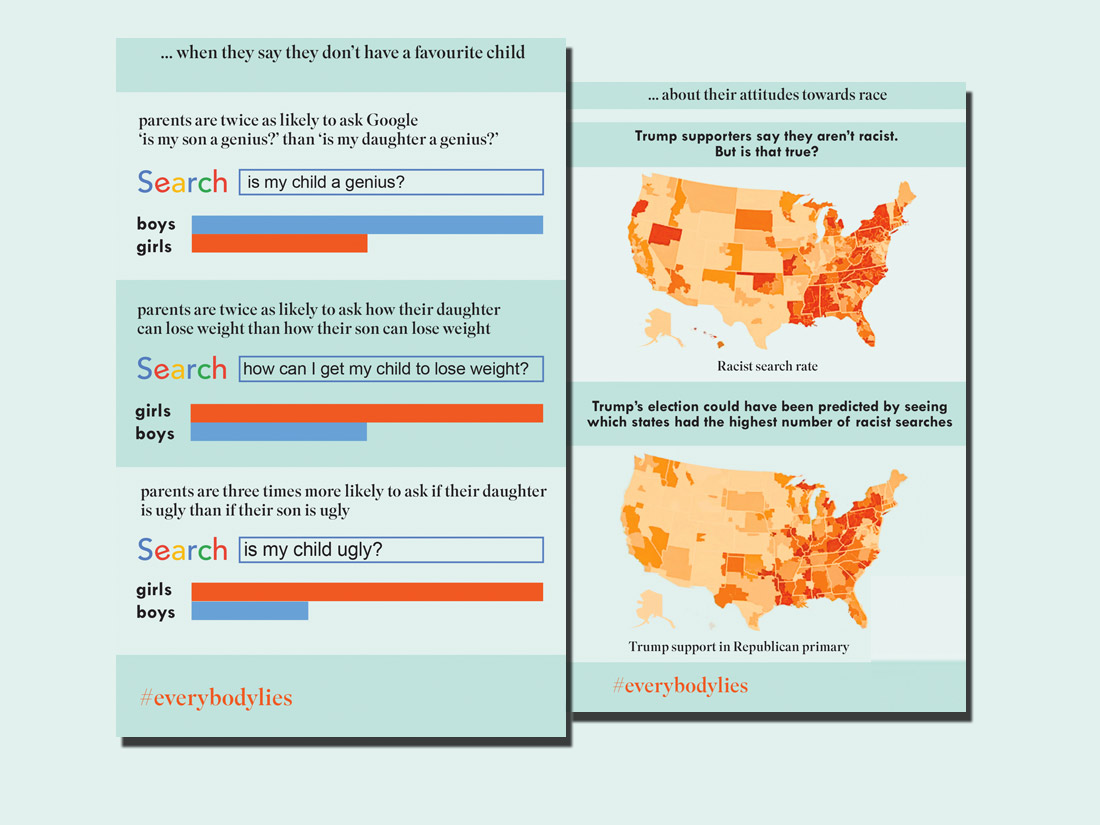 Many people are, for good reason, inclined to keep their prejudices to themselves. I suppose you could call it progress that many people today feel they will be judged if they admit they judge other people based on their ethnicity, sexual orientation, or religion. But many Americans still do.

Google searches can present a picture of America that is strikingly different from that post-racial utopia sketched out by surveys. When typing one racist term into Google Trends (given how toxic the word is) I fully expected it to be a low-volume search. Boy, was I wrong. In the United States, the word or its plural was included in roughly the same number of searches as the word “migraine(s),” “economist,” and “Lakers.” A large number of Americans were, in the privacy of their own homes, making shockingly racist inquiries. The more I researched, the more disturbing the information got.

The Google searches also told us that much of what we thought about the location of racism was wrong. Surveys and conventional wisdom placed modern racism predominantly in the South and mostly among Republicans. But the places with the highest racist search rates included upstate New York, western Pennsylvania, eastern Ohio, industrial Michigan and rural Illinois, along with West Virginia, southern Louisiana, and Mississippi. The true divide, Google search data suggested, was not South versus North; it was East versus West. You don’t get this sort of thing much west of the Mississippi. And racism was not limited to Republicans. In fact, racist searches were no higher in places with a high percentage of Republicans than in places with a high percentage of Democrats. Google searches, in other words, helped draw a new map of racism in the United States— and this map looked very different from what you may have guessed. Republicans in the South may be more likely to admit to racism. But plenty of Democrats in the North have similar attitudes.

Some years later, this study would prove quite significant in explaining the political success of Trump.

‘Can we tell, simply by what people are Googling, how many people are unemployed, and can we do so well before the government collates its survey results?

Everybody Lies
By: Seth Stephens-Davidowitz