With foot power we could power a street lighting
A digital creative agency from places all over. Our heritage is British (it rains there) and headquartered in the sub-tropics (its warm there), a small town that became a big town a destination Miami Beach.
21876
post-template-default,single,single-post,postid-21876,single-format-standard,ajax_fade,page_not_loaded,,select-theme-ver-4.1,vertical_menu_enabled, vertical_menu_transparency vertical_menu_transparency_on,wpb-js-composer js-comp-ver-5.1.1,vc_responsive
July 24, 2016 In Business, Design, Technology

“We could power a lamppost using solar panels or a small wind turbine, but the sun only shines here for a few hours in the day in the UK, and the buildings mean there isn’t much wind,” explains PaveGen founder and CEO Laurence Kemball-Cook, as we look at the street furniture on Bird Street, just north of Oxford Street in central London.

PaveGen, a British tech start-up, is aiming to use the built environment and the people within it to generate truly sustainable electricity. CN pays a visit to its first major public installation in Britain.

The ‘traditional’ renewable options of solar, wind and hydro work very well when conditions allow – but in an urban setting, they become less efficient.

PaveGen is trying to create a new form of renewable energy in cities – by using people’s footsteps to generate electricity.

The idea is already a reality, with PaveGen arrays installed in a number of places around the world. And on Bird Street, the company is demonstrating the first fully “smart street” it has worked on, according to Mr Kemball-Cook.

Foot Power is Simplicity itself 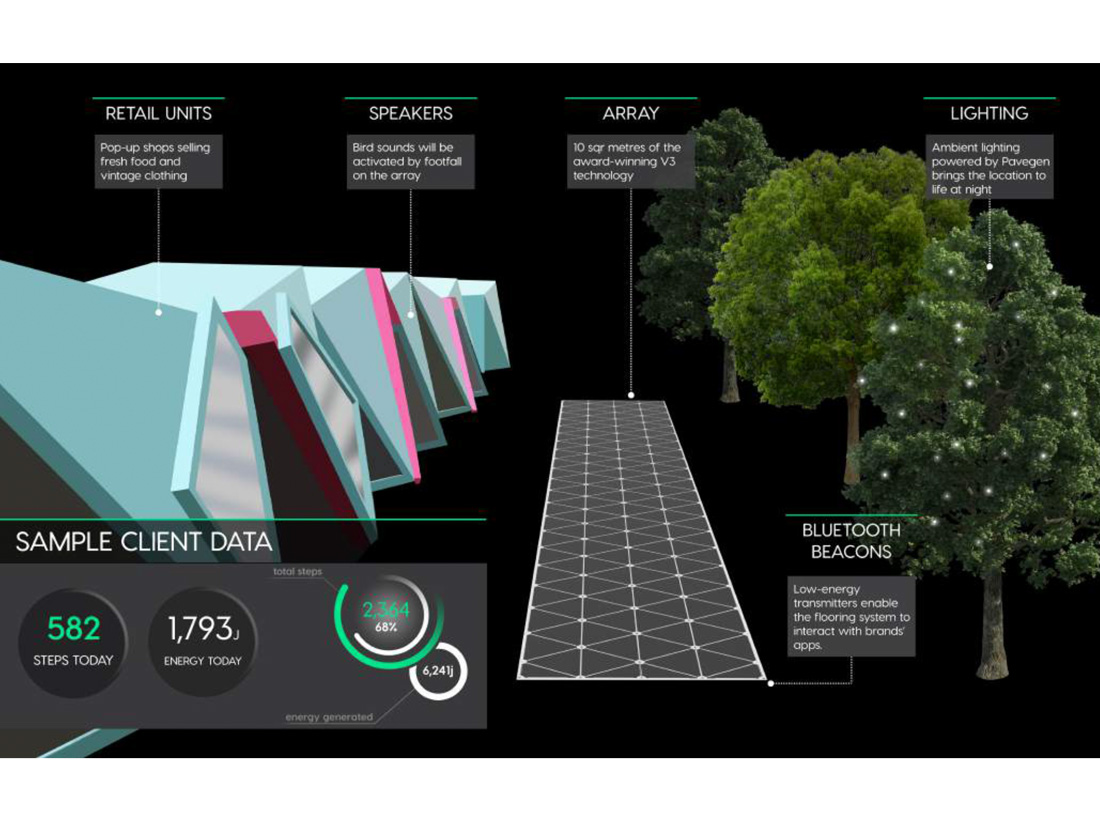 The principles underneath the technology are simple.

The downward force of a footstep generates rotational force that is stored in a flywheel, with that energy then transferred and stored in a single battery (see the video below) ready to be used when needed – having just one battery makes it lower cost and easier to maintain.

A single step will cause the flywheel to spin for 10 seconds, with more steps keeping it spinning for longer, thus generating more energy. There is one of these flywheels at every node joining the triangular PaveGen tiles together.

In the case of Bird Street, this energy is being used to power the street lights and play bird noises to create an “oasis”.

“I spent three years in an apartment in Brixton, basically making PaveGen in my bedroom” – Laurence Kemball-Cook, PaveGen

Intriguingly, the array is being used to generate data, with users’ footsteps recorded if they download an app to their phone. Walking on the panels becomes gamified, with users rewarded with things like retail discounts the more steps they take.

Mr Kemball-Cook says he has spent four years building the product. A former employee of E.ON, he was tasked there with finding solutions for creating energy in cities to power lighting – a task, he says, at which he “failed” .

“After that, I went off to university and built a prototype [of PaveGen],” he says. “I spent three years in an apartment in Brixton, basically making PaveGen in my bedroom.”

After coming up with a working prototype, he describes installing a tile on a building site on London’s South Bank – refusing to divulge the contractor or project, as he didn’t have permission. Within 23 hours, a developer spotted the tile and got in touch, leading to £2.5m of fundraising and a tour of 200 countries to show off the concept.

PaveGen is not a brand new concept, then, with more than 150 permanent and experiential arrays installed in 30 different countries. These include arrays at a French train station in Saint-Omer near Calais, as well as at Heathrow with the help of Arup. In the last month alone PaveGen has launched projects in Kazakhstan, South Korea and the US, including installations in Washington DC and Las Vegas.

The Bird Street installation is the first one on a street in Britain.

And as a result of the installation being in such a public space, the technology has to be robust enough to stand up to the people, pets and cyclists passing over it all day, every day, and Mr Kemball-Cook assures me it is up to the task. “It can cope with heat – when it’s 30 deg C in the air, it can be a lot hotter on the ground,” he says. “It will also work in the cold, it’s [water-resistant]. We also have to be resistant to vandalism in an urban environment, and it’s fire-resistant.

“It’s designed to live in hell.”

The technology is also “plug and play”, as Mr Kemball-Cook puts it, with the tiles able to slot into any space and be easily extended and connected to the single battery each array has.

“It can cope with heat. It will also work in the cold. We also have to be resistant to vandalism in an urban environment, and it’s fire-resistant. It’s designed to live in hell” – Laurence Kemball-Cook, PaveGen 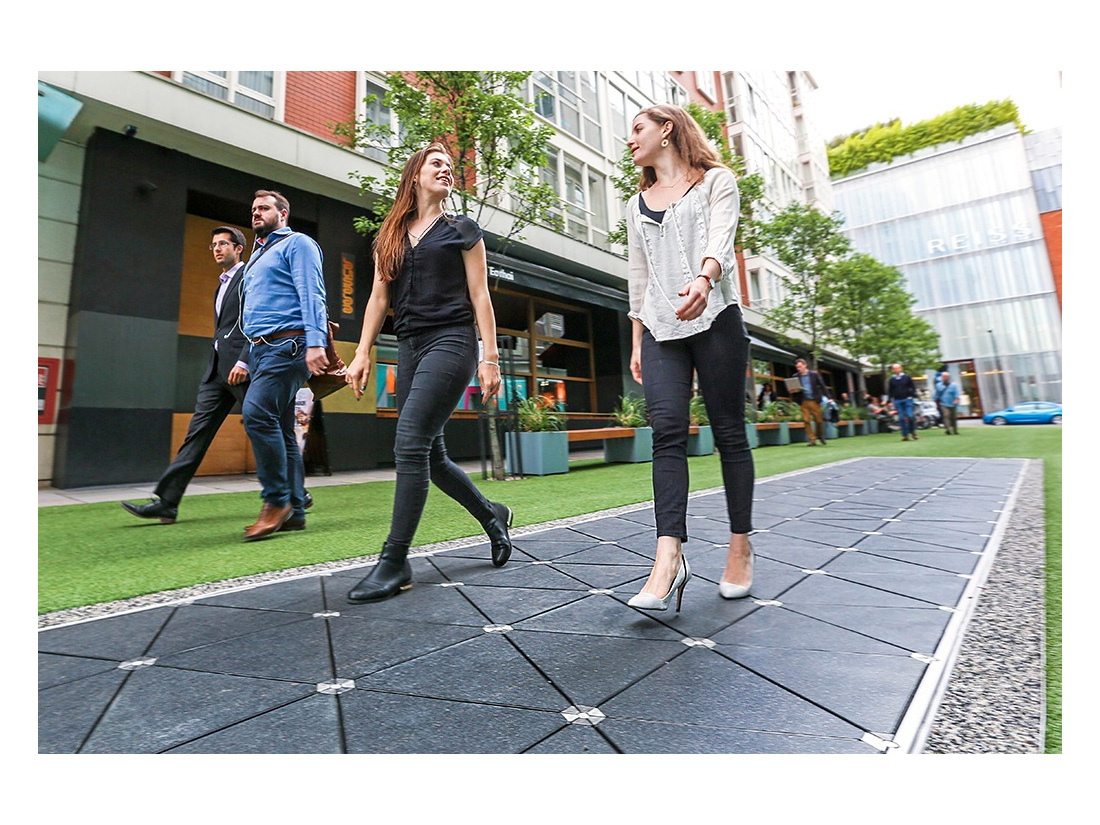 The installation at Bird Street features a row of independent retailers. The New West End Company, a partnership that represents many of the businesses and retailers in London’s West End, has funded the installation to get a better idea of what a truly ‘smart street’ could look like.

On the subject of cost, Mr Kemball-Cook says the tiles are currently comparable to “very, very high-end” flooring, but that he hopes to get the cost down as scale increases. Currently, PaveGen has capacity to produce 5,000 units a month, all manufactured in the UK, and is in the process of raising £5m to expand operations.

With the array in place, he hopes contractors and developers can begin to see a use for PaveGen in their own schemes, especially as that cost comes down.

“We know that construction companies can be risk-averse,” he says. “We’re trying to find those companies who are ready for it.”